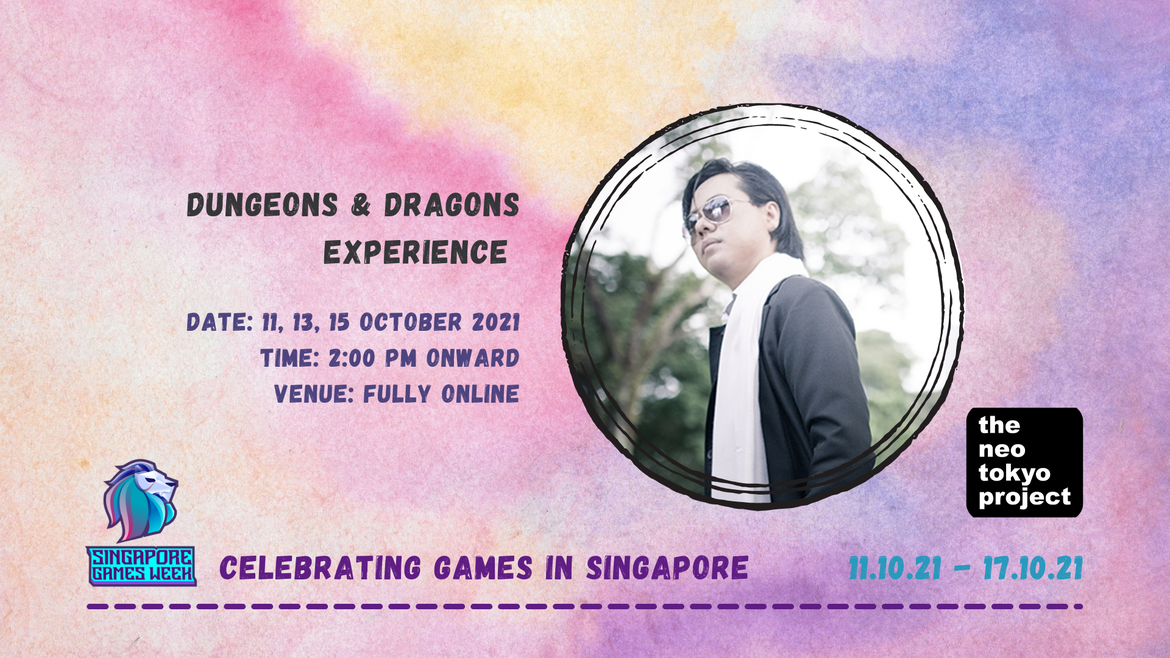 Learn to play Dungeons & Dragons with Singapore’s first and only ENnie Awards nominated adventure author Jason Koh, and experience a series of gripping, 4‐hour long adventures specially adapted for Singapore Games Week. Each session will introduce you to the rules for the world’s greatest tabletop RPG and draw you into an exciting tale of fantasy and high adventure, as you work together with your friends to overcome challenges, solve mysteries, and win the day. Games will be run on Discord. No prior knowledge is required, and all game materials will be provided. Attendees will receive a set of polyhedral dice and Singapore Games Week commemorative dice bag, and also a promo code to purchase tabletop RPG products from the Neo Tokyo Project studio and Geekified online store at a 15% discount.

This session will be conducted by Jason Koh from Neo Tokyo Project!

Jason’s love affair with Dungeons & Dragons began close to three decades ago, with a hand‐me‐down 1983 Red Box. Since then, he has terrorized numerous players both on‐ and offline as a game master. He contributed to numerous Dungeons & Dragons fan projects at the crest of the 3E Open Gaming wave and has since published multiple bestselling D&D Adventurers League titles under the CCC program, including the ENnie Awards 2019 nominated Ooze There? and its sequels. Presently, he plots world domination as the Overlord of Neo Tokyo Project ‐ a pop culture marketing collective he bankrolled with his Magic: The Gathering collection. He is also the producer of popular art convention Doujin Market, co‐founder of the D&D Adventurers League Singapore Community and RPG Day Singapore, a game evangelist, editor, and pen‐for‐hire. Jason insists he’s a social rogue (though everyone knows he’s a bard), loves cunning wordplay, and believes that “Vicious Mockery” is the best spell ever.

The presale period for this event is over.

If you already ordered a ticket

If you want to see or change the status and details of your order, click on the link in one of the emails we sent you during the order process. If you cannot find the link, click on the following button to request the link to your order to be sent to you again.

If this takes longer than a few minutes, please contact us.